The Treatment Room
Tips, tricks and advice for you as Sports Therapy Practitioners.

Welcome to The Treatment Room where we will add tips and advice that may be useful to you as practitioners within your chosen field. If you have any you would like to share, please send them to tim@sportstherapyuk.com and we may publish your top tip soon. To receive notification of future posts to our Treatment Room please Like our Facebook page by clicking here.

A Balanced View of the Fibularis Muscles

These muscles play a vital role in ankle stability as well as balance so here is a brief overview of how to approach and treat the Fibularis or Peroneals.

The Latin term fibular is also known by the Greek word peroneal and they mean a clasp from a broach referring to the appearance of the fibula bones set alongside the tibias.

The muscle group plays an important role in stabilising the ankle and helping prevent inversion sprains to the lateral ankle ligaments including the Anterior Talo-Fibular Ligament (ATFL) and the Calacaneo-Fibular Ligament (CFL). These are regarded as the most commonly injured ligaments in sport. Consequently, the Fibularis muscles may often be strained during forced inversion and plantar-flexion of the foot and should be assessed following this type of injury. Strength and flexibility will both need to be restored prior to a return to sport, as well as checking proprioception.

The Fibularis tendons are subject to stresses in sport involving repetitive ankle motion and particular those with raised arches of the foot.  These may result in overuse conditions through slow onset such as Fibularis tendonitis, or sudden onset including tears and subluxation.

To stretch the muscles plantar-flexion and inversion may be combined in varying degrees of range in order to achieve the most effective lengthening of the target muscles.  The simplest way to perform this actively is to sit with the knee flexed and the hip internally rotated.

The muscles are quite palpable and should be massaged to reduce any hypertonicity following injury, with deeper stroking added to stretch both the muscle and fascia during periods of immobilisation. To expose the group of muscles and make them more easily accessible the foot of the treated limb may be placed over the other with the client lying prone on the couch.

To see the full article including diagrams, stretches and sports massage images go to A Balanced View of Fibularis Muscles 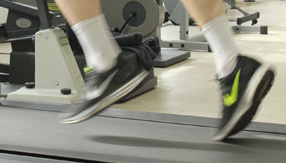 For more information, the book can be purchased from Amazon...

Visit us on Amazon